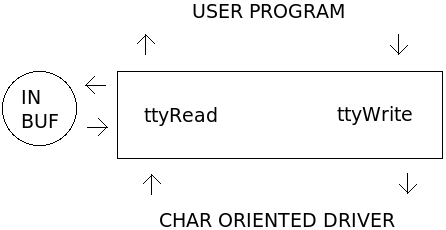 The TTY driver reads characters from an underlying device driver, normally a UART. Input is read from the underlying device in lines and buffered in the TTY's input buffer. Lines may be terminated with the line feed (LF or '\n') or carriage return (CR or '\r') characters. Read requests are not satsified until a full line has been read, or the TTY's buffer is full.

The TTY driver does not buffer output; it writes characters to an underlying device driver. When not in RAW output mode, the TTY driver cooks line feeds (LF or '\n') and carriage returns (CR or '\r'). The ttyWrite function always ensures CRLF is written to the output buffer when any of the following escape sequences are to be written: '\r', '\n', or '\r\n'. Backspace and delete are cooked to '\b\0\b' to remove the last character output. Null characters are ignored. When in RAW mode, set using control(device id, TTC_ORAW, TRUE, NULL), no output is cooked