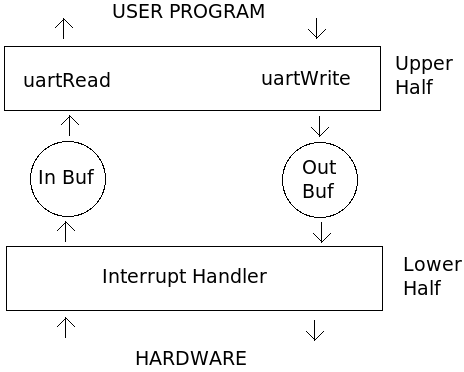 The UART driver is a char-oriented driver designed to work with a National Semiconductor 16550 UART. The driver is responsible for receiving and sending bytes of data asynchronously. The UART driver still needs work in the area of utilizing the FIFO capabiities of the 16550 UART.

The UART driver is divided into two sections: an upper half and a lower half. The two halves communicate via semaphores and buffers.

The upper half of the driver interacts with user programs. It does not interact directly with the hardware nor does it spinlock while waiting for the hardware to be ready. The upper half waits on semaphores which are signaled by the lower half to indicate bytes of data or free space are avaialable in the appropriate buffer. Read removes data from the input buffer and places it in a user supplied buffer and returns. Write places data into the output buffer from a user supplied buffer and returns.